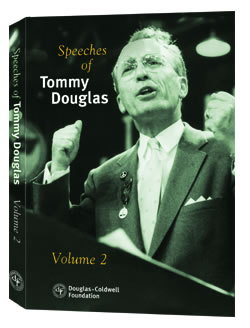 On October 16, 1970, Prime Minister Pierre Trudeau announced the proclamation of the War Measurers Act as a means of dealing with the FLQ crisis. British Trade Commissioner James Cross and Québec Labour Minister Pierre Laporte had been kidnapped by the terrorist Front de Libération du Québec. Soldiers appeared in the streets of Montréal and Ottawa. Civil rights were suspended across Canada as the War Measures Act was proclaimed in peacetime for the first time in Canada's history. NDP leader Tommy Douglas was one of the few who stood against the proclamation of the Act, calling it a black day for civil liberties in Canada. In recogniation of the 40th anniversary of the proclamation, the Douglas-Coldwell Foundation presents the speeches of the four national political leaders to Parliament in the historic debate that took place on October 16, along with commentary from former NDP Leader Ed Broadbent and McGill University historian Desmond Morton.

Order your copy today! Order a piece of history preserved forever on DVD for just $29.95 plus appropriate taxes - includes shipping and handling